Does Web Developer Have Too Many Features?

I have read a few posts online recently that started to make wonder if the Web Developer extension has too many features and that this feature overload is reducing the usability of the extension.

What Started Me Wondering

First, Garrett Dimon posted Be Careful What You Wish For in which he says:

Knee jerk feature addition involves little to no deeper understanding and can be very harmful to the success of an application.

Then Jason Fried posted Forget Feature Requests and suggested this method for dealing with feature requests:

So, ask for requests, read the requests, listen to your customers, and then forgot what they said. Let them remind you over and over and over again. That’s how you find the real gaps in your product.

I found both of these posts interesting, but what really made me tie them back to the Web Developer extension was Roger Johansson’s post about Evaluating Web Sites For Accessibility With Firefox where he writes:

I regularly use the Web Developer Toolbar for evaluating accessibility, but I never realised some of the commands Patrick mentions existed. Outline Custom Elements, Linearize Page, and View Form Information are all very useful commands that I’ll be using a lot now that I’ve been made aware of them.

Feature requests for the Web Developer extension come in via either email or the forums and as long as I feel the request makes sense then it is added to the to-do list. I typically then work on the features that I consider to be the most useful or are getting the most requests, as well as any that can be implemented easily.

This is fairly unstructured and means I do not necessarily have a clear vision of what I am going to be including in the next release. Over time this has contributed to the menus becoming more cluttered and harder to navigate.

In version 0.8 of the extension the menus were tidied and I have repeated this exercise for the next release. In addition to adding menu separators, I have also replaced the alphabetical sorting of features with something hopefully more intuitive. Now the features under each category are grouped by behavior in the following order:

The new CSS menu can be seen here, for example. As soon as I made this change I found the menus easier to navigate, although it will take a little time to get used to some of the new feature locations. 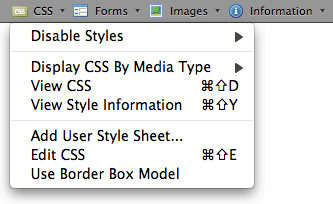 I think the biggest improvement that could be made would be to write some better documentation, but this is always a lower priority than development.

As much as anything this post is about soliciting feedback from users of the Web Developer extension.

Do you find the extension confusing and unintuitive? If you do, is this because of the menu layout or has the extension just become bloated with unnecessary features? Do you think some features should be removed from the extension and, if so, which ones? What other solutions would you suggest to make the extension more intuitive to use?

Web Developer, Work
October 22nd, 2005
Chris Pederick
The conversation on this post is powered by webmentions and Micro.blog. Comments on Instagram and Mastodon are pulled back using Bridgy.