A Day With Mozilla

A month ago I found out that I had won a grand prize in the Extend Firefox contest and last week I met with Mozilla for a day of activities with the other winners: Michael Wu and Josep del Rio.

I started the day by taking Caltrain down to Mountain View where I met Michael and Josep as well as Rafael Ebron, Mozilla’s Product Manager. We headed to the Mozilla offices where Rafael gave me a quick tour before we had a bunch of publicity photos taken and met Alex Guerra from Mozilla’s public relations company A & R Partners.

After the photo shoot we drove back into the city to have lunch with Harry McCracken from PC World magazine. However, we arrived a little early and Rafael suggested we head to the Current TV offices where a friend of his could give us a tour.

Current TV is a national cable and satellite channel where a third of their programming is “viewer-created content”. They are located in the old E*Trade building in SOMA and we were shown their entire process including a studio, editing rooms and the main room where they control what is currently being broadcast. The office is stunning and the process is fascinating, plus we even were able to see Al Gore’s office as he is the Chairman of Current TV.

Following the Current TV tour we had lunch with Harry McCracken before meeting a number of people from Download.com, including Peter Butler and Jason Parker. We talked about and gave some demos of our extensions before Rafael showed sneak previews of some of the entries in the Firefox Flicks contest.

We still had some time to kill before dinner so we took Michael and Josep on a quick tour of the city as this was their first time to San Francisco. It was mainly a driving tour because of the rain, but we showed them North Beach, Coit Tower, Lombard Street, the Palace of Fine Arts and the Golden Gate Bridge. As we drove into the Presidio, Rafael called a friend and said he would try and see if he could set up one last tour for the day. His friend agreed and told us to meet him near the Yoda fountain…

So we headed into the lobby of the new Lucasfilm offices in the Presidio. Just in the lobby there were statues of Boba Fett and Darth Vader as well as lightsabers and award trophies. After signing in with security we began our tour.

First, we were shown the on-site cinema where they show movie previews to the company. Everything was designed to make the movie experience perfect, from sound-dampening walls to a state of the art digital projector. However, no food or drink is allowed inside in order to maintain the quality. From there we were led through high-tech security barriers to the main offices. 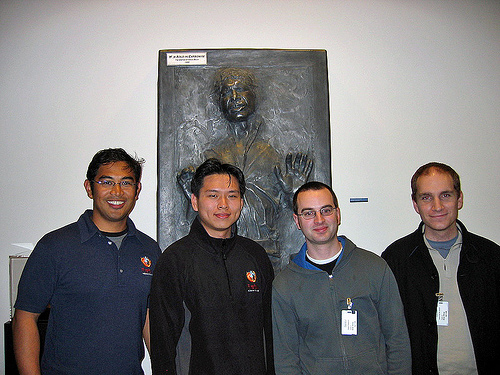 During the rest of the tour we saw editing rooms, dining halls, posters from every movie the company had worked on and countless models from movies such as Jurassic Park, Back To The Future and Ghostbusters constructed in incredible detail. A number of times we were told we could not go into certain rooms as they were working on current projects like Pirates Of The Caribbean: Dead Man’s Chest. 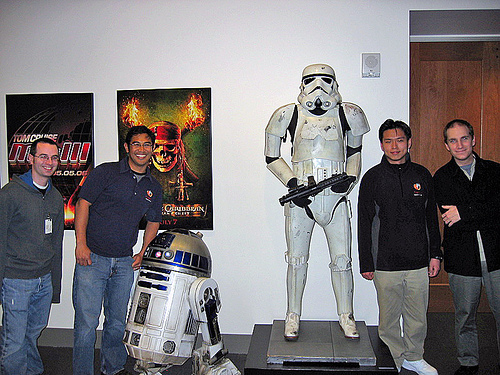 After the amazing tour we headed to the Thirsty Bear for a quick dinner and met some San Francisco geeks including Steve Rubel.

All in all it was a fantastic day and I want to thank Alex and Rafael for their hospitality.

Web Developer, Work
April 21st, 2006
Chris Pederick
The conversation on this post is powered by webmentions and Micro.blog. Comments on Instagram and Mastodon are pulled back using Bridgy.