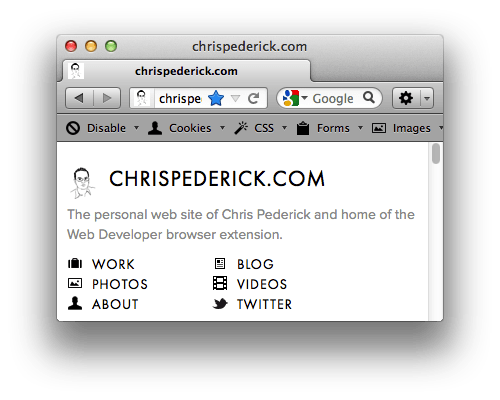 A few notable changes in this release are:

And of course there are many fixed issues. For the full list of changes in this version please read the release notes.

As a beta release this build is not guaranteed to be stable. The idea behind this beta release is to give people the opportunity to provide feedback about this next version as well as report any bugs. Please report any feedback or issues in the beta forum or via the contact form.

Note that the forums on chrispederick.com have been upgraded as my self-hosted version of FluxBB was having more and more problems recently. Therefore I have upgraded to a hosted Vanilla Forums setup.

Unfortunately as part of this upgrade the existing forums data including user accounts and posts could not be easily migrated so you will need to re-register if you had registered previously.

Let me know if you see any problems with the new forums by posting in the forums or via the contact form.

The updated ‘View JavaScript’ output in the next version of the Web Developer extension including syntax highlighting and line numbers. 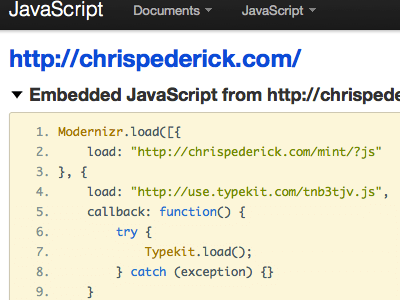 A preview of the redesigned and streamlined options dialog for the next release of Web Developer. 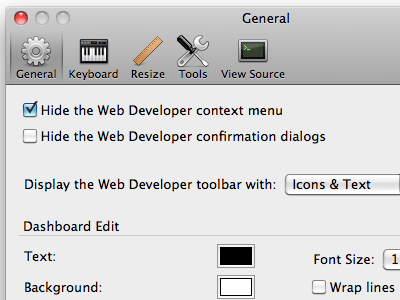 At the end of January I released new versions of both the Web Developer and User Agent Switcher extensions. These patch releases primarily added support for the then upcoming release of Firefox 4 which eventually came out two months later. Since then I have been extremely busy at work and have not had much time to work on the extensions, but I wanted to give an update about some issues that were found with Firefox 4.

The main issue with the Web Developer extension in Firefox 4 is that the toolbar menus are not checked when they are activated on Mac OS X. This is actually an issue with Firefox 4 and I have filed a bug with Mozilla that they have acknowledged, but are still working on. Hopefully this will be fixed soon as it’s a major issue that affects all toolbar menus in the browser.

There are also a few features in the Web Developer extension itself that have issues in Firefox 4:

I’ll be looking to fix all of these issues in the next release of the Web Developer extension.

The User Agent Switcher extension also has a couple of issues in Firefox 4. First of all, the extension is not easy to access in Firefox 4 on Windows. There are currently a couple of ways around this as explained in the screencast below and I’ll be looking to fix this in the next release.

The second issue is that Mozilla removed the ability to override some of the user agent properties in Firefox 4 that you could override in previous versions. Specifically the app code name and vendor and vendor sub properties can no longer be overridden. There is nothing I can do to workaround this, but I will be updating the User Agent Switcher extension to indicate that those properties have no effect in Firefox 4.

As always I cannot give estimates for when the extensions will be updated as it depends on how busy I am at work, but I am actively working on them whenever I have free time and will release them as soon as I can.

I had originally hoped to release version 1.2 of the Web Developer extension in time for Firefox 4. Version 1.2 will merge the Firefox and Chrome codebases of the extension, as well as adding new features and fixing a number of issues. However, this is still in development which is why I have released this minor update to make sure that Web Developer is at least compatible with Firefox 4.

I’m continuing to work on version 1.2 so look for progress updates on Twitter and Dribbble.