Why Web Developer May Finally Be Coming To Safari

When Safari 5 was released a year ago Apple followed the lead of Firefox and Chrome and added support for extensions. A number of people contacted me at the time asking if I would port Web Developer to Safari and I said I would look into the possibility.

When I looked at the Safari extension API it was clearly based on the Chrome extension API and I was initially hopeful that creating a Safari version of Web Developer would not only be possible, but relatively straightforward.

Why Web Developer Does Not Work With Safari (Yet)

My first thought was to add a toolbar button that could open an HTML version of the Web Developer toolbar just like I do in Chrome:

However, while Safari supports adding custom toolbar buttons they can only execute JavaScript and cannot open HTML popups like Chrome allows. This did not appear to be an issue since Safari extensions are allowed to create entire toolbars—something that Chrome extensions cannot do—and this would be the ideal implementation for Web Developer.

As I started to work on creating Web Developer as a Safari toolbar though, a major shortcoming became clear. Safari toolbars can only contain HTML elements and do not allow those elements to expand outside of the toolbar—expanding menus in the toolbar are not possible.

The only way to work around this limitation is to use HTML select elements—an option that extensions like Safari Developer are using: 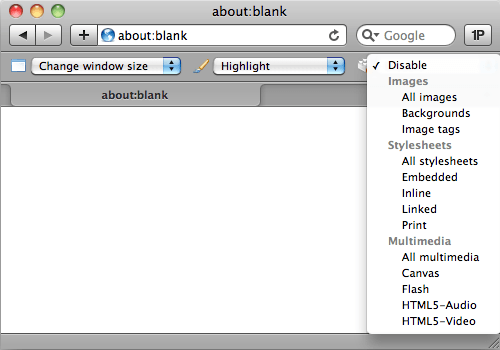 I personally see this as a clunky solution with major limitations and poor usability. Therefore I decided to wait and hope that the Safari extension API matured to allow a better implementation of Web Developer.

Why Web Developer May Work With Safari In Lion

Cut to this week and Apple released a bunch of new information about the next release of OS X called Lion. Tucked at the end of their section detailing the new features in Safari in Lion is the following paragraph:

If I am understanding this correctly it sounds like the Safari extension API will be updated to support HTML popups being opened by custom toolbar buttons just like in Chrome. If this is true then I will once again look into porting Web Developer to Safari.

OS X Lion does not have a firm release date yet, but it is due to be released some time in July and I am currently working on the next release of Web Developer for Firefox. Any development on a Safari version would have to wait until the Firefox update is complete, but I cannot give any estimate as to when this might happen. Just know that I will be investigating the possibility of porting Web Developer to Safari as soon as I have the time once Lion is released.

Web Developer, Work
June 8th, 2011
Chris Pederick
The conversation on this post is powered by webmentions and Micro.blog. Comments on Instagram and Twitter are pulled back using Bridgy.