For Christmas I bought my friend Alex tickets to see the Los Angeles Lakers play basketball against the Golden State Warriors. However, instead of going with regular priced seats, I decided to splash out and bought tickets just a few rows back in the lower tier from StubHub. The game was this Saturday and it was awesome! 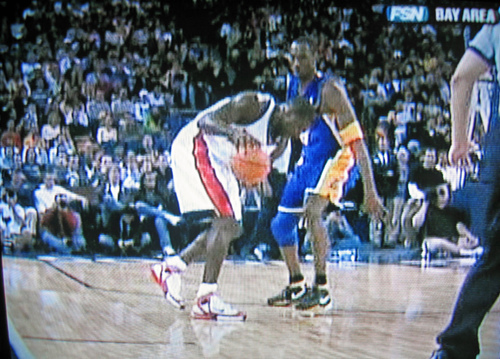 We were sat directly behind the sports reporters next to one of the baskets and, while I knew the tickets would be great, I did not realize how much they would change what you see of the game. Being that close to the action allows you to see and hear the players much more clearly and makes you really appreciate the physical nature of the game.

The game itself was fantastic—although the Warriors lost—with a number of ridiculous dunks from Kwame Brown, Baron Davis, Smush Parker and Jason Richardson. One of Jason Richardson’s dunks in particular was a breakaway where he appeared to be coming straight toward us in our seats.

While I certainly cannot afford to buy these tickets on a regular basis, I would love to do this again in the future.